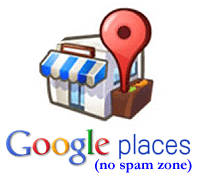 We have long been predicting that one day all the shenanigans so called “SEO Companies” were doing to Google Places will one day come to an end. Well, that day is upon us. Google are sending out emails to certain merchants asking them to log into their accounts and verify their data.

As you may have guessed, a majority of the merchants who bought SEO services for Google Places from unscrupulous SEO have no clue which email addresses were used, and how to login to their Google Places accounts. Also, chances are they no longer have a relationship with their past SEO Company, so just like that their fake Google Places listings will rightfully disappear.

Of Course legitimate businesses that have their ACTUAL listing live on Google Places have nothing to worry about. However, those who spammed Google Places by using the services of these so called SEO Companies, that went around collecting addresses of abandoning buildings, then used forwarding addresses on those abandoned buildings to receive the verification postcard Google sends, well they will be eating it. The old adage of cheaters never prospering is at least partially correct, they will prosper in the short term, but they will create long term devastating effects for themselves, their businesses, and their websites. You can see what Jade Wang of Google had to say about these verification emails: https://productforums.google.com/forum/#!topic/business/l-PEgrlGCgE/discussion

Along those lines, we get calls from merchants all the time that are try to disengage with their current SEOs, as post Panda, Penguin, and now Hummingbird, their sites don’t appear on the first page of Google as they once did. Many such SEO companies believe that ultimately Google will drop these penalties and somehow their client’s sites will reappear on Google’s first page – folks that is not going to happen. You will need to clean up your bad backlinks, your content, any blackhat SEO hacks, anything that would have penalized your site in the first place, or your site becomes a throwaway. Sorry, but that is the cold hard truth.