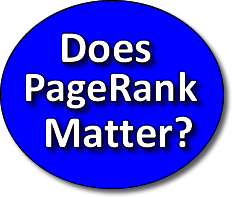 As of late we have been getting this question by one out of every five callers. Does PageRank matter? In other words, they are asking if they have a higher PageRank for their website than that of their competitors, will they rank higher for keyword searches on Google. The best way to explain if Pagerank matters or not when it comes to improving search engine ranking, or the overall SEO picture for that matter, is to go through the history of PageRank.

PageRank is the brainchild of none other than Larry Page, the co-founder and current CEO of Google. Yes, PageRank is a word play on ranking a page that is named after Larry Page. The original intent of PageRank was to do exactly as the name implies; rank pages it crawls on the Internet.

The Progression of PageRank

As time progressed, many webmasters started to notice that PageRank (that green bar) was not correlating correctly with actual search rankings. Meaning, a PageRank 7 website was being outranked by a PageRank 5 website. Well, that was a bit puzzling, and of course it completely crushed the PageRank sellers; you know the folks who bought a link from a PageRank 8 website for $400 per month, and then sold their now PageRank 7 website links to 30 webmasters for $250 each. It was a simple business that was obliterated when news broke that PageRank no longer mattered to actual rankings of a website. So PageRank became more associated with a trust factor. Meaning if the site had a PageRank 4 or above, then it was probably a bit older than the other sites that didn’t have that metric, so those sites can be trusted a bit more. In essence, we all trust things that have been around longer.

PageRank started to get updated less slowly by Google. Everyone wondered why and when the next PageRank update was going to occur. However, a site would get a nice boost from a PageRank 4 to a PageRank 6, but their rankings would essentially remain unchanged. That frustrated many webmasters until most just stopped paying attention to PageRank when it came to SEO, which is the only reason anyone every paid attention to PageRank in the first place.

Many webmasters had completely wiped PageRank from their memories, up until very recently when Mr. Cutts of Google announced on his Twitter feed that PageRank has been updated. Of course, that set off a wave of discussions on PageRank, and we started to get a bunch of calls from people asking if PageRank matters.

PageRank Does Not Matter When It Comes to SEO

Alas, PageRank does not matter at all when it comes to search engine rankings. We routinely see a PageRank 0 site outranking PageRank 4 sites. PageRank is simply NOT part of Google’s rankings algorithm anymore. Consider PageRank a legacy created by a very smart computer scientist who changed how search works forever. Are you (or do you think some executive inside of Google) going to tell Mr. Page that his PageRank, something he named after himself is obsolete? Of course not, I think it should stay there for as long as Google is around. It is a reminder of how far and how fast Google has grown, and how search impacts our lives.