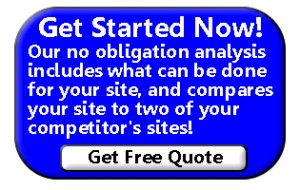 This is a free white paper about a realtor from Jacksonville Florida that had hired a Jacksonville SEO Company to do the search engine optimization for her real estate listings site. This realtor primarily wanted to get clients that were interested in buying or selling luxury condos in Jacksonville. Her SEO in Jacksonville had convinced her that they can flood her site with targeted traffic using what they called laser targeted microsites embedded in her own site. In other words, that is fancy speak for doorway pages. The scheme would be target every Jacksonville and every city within 1 30 mile radius of Jacksonville, and add the words condo, condominium or luxury condo to the root city and state key phrase. If they had actually used unique content, that would not be considered a black hat technique. Instead, the SEO Company in Jacksonville used the same content, except they changed the target key phrases around depending on which page they were targeted. In essence, the only difference between each page was the targeted key phrases of that page.

The client told us when she initially contacted our SEO company, that she was surprised they delivered the SEO results so quickly. In fact, she said she called them on a Tuesday and the following day Wednesday they had already added about 200 pages to her site, all optimized for various cities and genres of condo related key phrases. The only way that would be possible is if they used nearly the same content, and they used a script that generated those pages automatically for them. Sometimes people ask us what would be deemed black hat. We always respond by pointing people to the Google Webmaster Guidelines, and if the information they seek is not found there, we ask them one question; is whatever SEO method you are using have a any automation involved? If yes, chances are that is black hat. In any event, the client’s site did shoot up to the first page of Google. For several months she enjoyed getting several phone calls each day. Apparently, she sent that SEO company in Jacksonville a fruit basket to thank them, when she finally booked her 30th client, as a result of the Florida SEO company’s SEO work. However, whatever is built on sand, won’t last during the storm.

The client recalled how one day she noticed calls were not coming in like they usually would. They had trickled down to mainly inquiries for already existing clients. So she Googled and found she was completely off the first page. She wasn’t found on a single key phrase. She panicked and called the Jacksonville SEO Company. The phone rang busy. She tried again later. It was still busy. She followed up the next day, and the phone was disconnected! She quickly learned the SEO in Jacksonville had used that black hat SEO technique for all of their clients, and in one day, everything was lost!

The client found us after she had read a positive review about our SEO company. She called us, and we explained to her that this is going to be a process. She will not be able to bring her site back to the first page overnight. We accepted her SEO project, removed all of the doorway pages, updated her traditional sitemap and sitemap.xml file, and asked her to write more unique textual content on the site that was targeted to humans that were interested in buying luxury condos, and not search engine robots. We then verified the site with Google, which the previous SEO Company had neglected to do, and submitted her sitemap.xml file to Google. We waited. In exactly 63 days most of her rankings returned! She was ecstatic. It also returned in the nick of time, during summer when it is the busy buying and selling seasons, and two months before she gave birth to her baby boy!

Here is what we learned:

When it comes to creating pages, one should never use automated methods for doing so. Moreover, having garbage duplicate content doesn’t help anyone on the Internet. It will not help educate the searcher who lands on your site, and it will not help you generate sustainable leads for the long term. Sure you may get calls during a short period of time, but what happens when that system is caught? Why let your competition use your penalty against you? Surely, that is what they will do. The only people watching your rankings as closely as you are, is your competition! As soon as they figure out your site is penalized, do you think they are not going to use that fact as a selling point to steal clients away from you?

SEO takes time, and SEO takes effort. Nothing worthwhile happens overnight. Trees do not bear fruit overnight. People in general, we all have a tendency to look for the easy way out. It’s like those infomercials that continue to fool so many people into believing in the easy life. You just sit there do about 6 minutes of work and money rolls in. They call that “passive income,” but passive income is a myth! You have to work for your money. When an SEO company adds 200 new pages to your site in less than 24 hours, and they charge you a monthly recurring fee for essentially the work a script did for them, you have to wonder if everything is in order. If it was that easy to rank a site on the first page, why doesn’t everybody? There is only enough room for 10 spots on a page, and only those who put the time, energy, and resources into their SEO projects will bear fruit for the long term. White hat SEO will never go away, but black hat SEO will never last.